Past production from the property is estimated to be 5,000 tons grading 0.2 opt gold and 4 opt silver.  Records also indicate that 15,814 tons of manganese ore was mined at an average grade of ~40%.  An indicated resource of about 20,000 tons at 0.08 opt gold is estimated from underground sampling of the Vietti and McDonald workings.  Drilling has been carried out along trend on roughly 150-meter centers from the Vietti workings.

Gold, silver and manganese occur within jasperoid developed along the contact of Joana limestone and Pilot shale and at the contact of Pilot shale and Devils Gate limestone.  The mineralization appears to be structurally controlled by high angle faults.  Altered rhyolite(?) dikes have been found at surface and in drilling, although their relationship to ore is undetermined.  The mineralization has been followed to depths of 400 feet in historic workings.  Gold values to 40 g/t and silver to 280 g/t have been obtained by the USGS and others from the Vietti and McDonald underground workings.  The gold is associated with jasperoid, calcite, fluorite, galena and cerrussite and occurred on the hanging wall side of the manganese ore.

The project area encompasses a northwesterly trending structural zone which can be followed along strike for over 2,500 meters.  Multiple faults trending NE cut limestone and shale which are similar to the host rocks in the “Alligator Ridge” district.

In the 1930’s fourteen core holes were drilled on the property by American Machine and Metals.  These holes were not tested for gold.  Recent exploration for precious metals includes 2 holes by Newmont in 1978, 7 holes by Homestake in 1980, and 26 holes by Echo Bay from 1988 to 1989.  Eight of these holes encountered +0.01 opt or better grades over 3 to 18-meter thicknesses while 7 others contained +0.00X values over 45 meter thicknesses.  The best hole intersected 1.5 meters grading 15.4 g/t and 6 meters grading 1.6 g/t gold.  This work defines a corridor of gold mineralization trending northwesterly.  The zone is lost under alluvial cover to the southeast and northwest, but appears to continue based on CSMT surveys.

The property shares similarities with Alligator Ridge and has potential for over 1 million ounces of gold equivalent given the grades encountered within drill holes and underground. 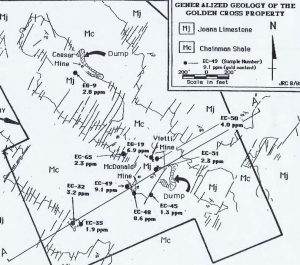 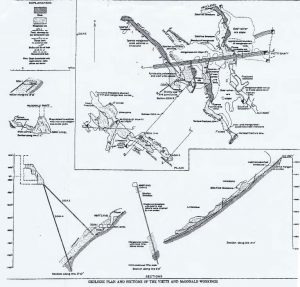 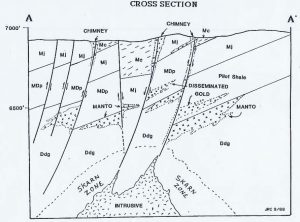