The Medicine project is currently leased to a junior mining company.  The property is located in northeastern Nevada on U.S. Bureau of Land Management lands.  A total of 149 unpatented mining claims (approximately 2980 acres) make up the land package.  Historic production from veins/fault zones on the property are reported to be at least 350,000 pounds of lead, 1700 pounds of zinc and 15,500 ounces of silver.

Multiple mineralized zones have been mapped and sampled on surface for over 17,000 feet in length.  Mineralization is associated with several parallel structures with coincident replacement of limestone beds.  The multiple zones cover an area over 4,000 feet in width.  The current drilling covers an area less than 10% of the identified mineralization.

A total of 125 conventional and reverse circulation drill holes have been completed on the Medicine property from 1983 to 2008.  Drill holes ranged from 30’ to 730’ in depth for a total footage of 17,550’.  Average depth of each hole is 140 feet.  All but one hole was drilled vertical. The 2008 program was designed to expand at depth and along strike the known resource of 500,000 tons grading 2.3 opt Ag.  This resource was previously drilled to an average depth of 100’ over a strike length of 800’ and a width of 200’.  The recent drill program covered a strike length of 1200’ succeeding in extending the deposit along strike to the NE, the SW and to depths from 200 to 300’.

The resource area is oriented along one of five NE trending structural zones hosted by upper Paleozoic limestone.  The recent drilling suggests an increase to 1 million tons of silver-lead-zinc mineralization at an average grade of 2.5 opt silver and 6% combined lead-zinc.  Past drilling has encountered highs of 26 opt silver, 27% zinc and 8% lead over 5 feet intervals.  Silver mineralization in the 2008 drill holes was consistent with previous drilling ranging from 1.5-12 ounces per ton over a thickness ranging from 10 to 115 feet.  Lead grades range from 2% to 8% and were often associated with silver mineralization over similar thicknesses.  Zinc grades were more widely disseminated, ranging from 2% to 27%, generally averaging 3-7% over widths from 20’ to 210’.  Mineralization is characterized by strong limonite content with oxidation and silicification.  Oxidation commonly continues to depths of 300 to 500’ in the resource area.

In summary, the Medicine property contains significant Ag-Pb-Zn-Ba mineralization hosted by altered carbonate rocks.  The trend is open along strike in both directions.  Width and depth information is incomplete, however it is reasonable to assume a width of 200’ in the original fault zone and depths up to 300’ can be substantiated with additional drilling along strike and within the parallel mineralized structures.

Currently leased out to Northern Lights Resources in JV with  Reyna Silver – https://reynasilver.com/projects/medicinesprings 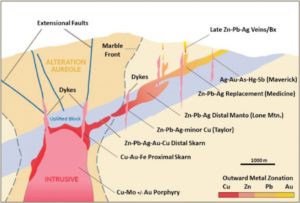 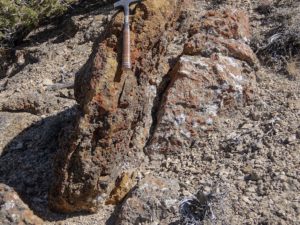