Additionally, 75 surface rock samples and 136 soil samples have been collected along with detailed geologic mapping compiled from several sources.  The above work has identified at least 20 breccia pipes and two significant shear zones all mineralized with copper, molybdenum, gold and silver.

1)Two breccia pipes on the Benton East hill have obvious copper and molybdenum mineralization at surface, in drilling and underground.

2)A large breccia to the north of Benton has the thickest drill intercept of mineralization and a dimension of roughly 800 by 1500 feet at surface.

3)Highest rock chip values were 8.2% copper and 0.25% molybdenum from the north part of the property.  Gold values to 2.9 g/t were obtained from one of the shear zones.

The property has a well defined footprint of alteration and mineralization at surface and in drilling providing direct drill targets on the property. 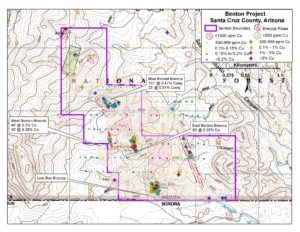 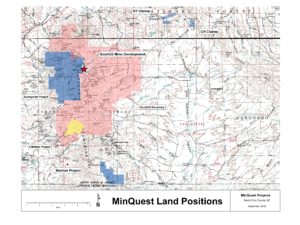