The Crescent Fault (CF) Project is comprised of 33 unpatented mining claims covering a total of 660 acres.  The project is located about 8 miles east-northeast of the Cortez Mine near the town of Crescent Valley, Nevada within the Battle Mountain-Eureka.  The project represents an advanced grass roots exploration property (defined targets, but no defined resources).

The project covers an area of Permian carbonate and clastic sediments intruded by a lacolith or sill of granodiorite reportedly of Cretaceous age.  Surface alteration is manifested by jasperoid and banded quartz veining.  The through-going Crescent Fault zone has both lateral and vertical displacement and has been active up to recently.  A nearby geothermal system is presently active forming a calcareous sinter.  Historic work by Chevron (geothermal), Homestake, Hemlo\Golden Giant, North Mining, Golden Peaks, American Goldfields and others have identified gold mineralization within both the foot wall and hanging wall of the Crescent Fault.

Most recently, American Goldfields completed seven CSMT lines to help define mineralization and depth to bedrock on the down dropped portion of the zone.  This work coupled with past exploration has extended the known mineralization to the northeast and southwest.  These results confirm the existence of a gold-bearing hydrothermal system associated with silicification of host rocks and structural preparation.  Continued exploration of this system is recommended to define the extent and quality of the gold mineralization.

Nearby drilling of the geothermal system has identified a thick zone of disseminated gold under shallow alluvial cover.  Other nearby deposits include Barrick’s Cortez, Cortez Hills, Gold Rush, Four Mile, Buckhorn, and Pipeline complex mines which have produced over 20 million ounces of gold and contain an additional 25 million ounces. 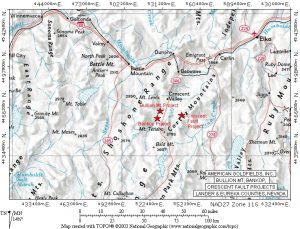 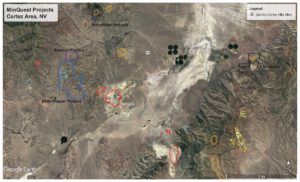