The HP project is comprised of 5 unpatented mining claims covering a total of 100 acres.  The project is located near the ghost town of Marietta, Nevada within the Walker Lane Trend.  The project is leased to a private company with a 3% NSR.  It represents an advanced stage exploration property with a small defined resource of 31,000 ounces of gold and 1.09 million ounces of silver.  This resource is open along strike and to depth

The project area covers sheared and brecciated silciclastic rocks of the Triassic Excelsior Formation intruded by a porphyryitic quartz-monzonite of Laramide age.  Gold and silver are associated with sheared calcareous sandstone and quartz veins.  Gold values range from 0.2 g/t to 15.6 g/t and silver ranges from 2 g/t to over 180 g/t in surface sampling and drilling.

Exploration history includes some small unrecorded production from the property that probably occurred between the early 1900’s and WW II.  Modern exploration was confined to work conducted by American Gold Resources (AGR) from 1989 to 1992.  AGR completed a total of 59 drill holes testing the above referenced resource area.  Of this amount, 33 holes were drilled on 50 feet centers while the remaining holes were drilled on 200 feet centers.  Drilling to a depth of 350 feet has defined a mineralized zone that is mostly hosted within a graben of calcareous sandstone with quartz veins.  Further work is needed to determine the strike and extent of the mineralization.

Nearby deposits include the Camp Douglas area which produced over 200,000 ounces of gold. 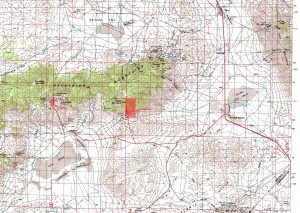 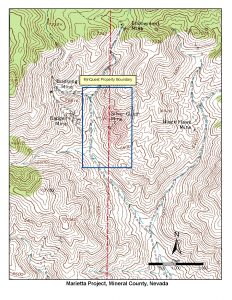